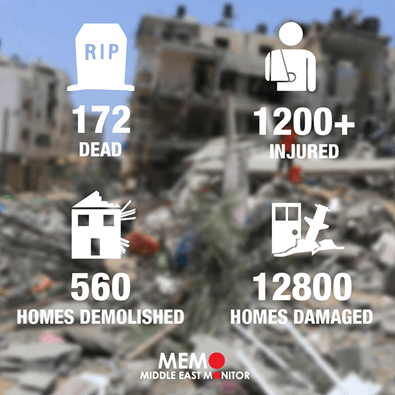 Palestinian Minister of Public Works and Housing Mofeed Al-Hasayneh revealed that the number of Palestinian homes completely destroyed by Israeli strikes since the start of the current assault is 560.

Speaking to Anadolu news agency, Al-Hasayneh added that the number of residential houses that were partially destroyed during the last seven days of the war is 12,800.

Since the beginning of Israel’s latest assault on Gaza, which it calls “Operation Protective Edge”, Israel has killed more than 170 Palestinians and wounded more than 1,200. Most of the Palestinian casualties are civilians, with large numbers of children and women.

On the other side, there have been no reported Israeli deaths caused by Palestinian rockets fired from the Gaza Strip. The Israeli emergency department reported that the number of Israelis wounded is 208, including 11 hit by rocket shrapnel, 36 injured as they were rushing to shelters, six suffering in car accidents blamed on rocket alarms and 151 suffering from panic.

After a meeting of the Israeli security cabinet on Sunday night, Israeli leaders decided to continue and intensify their assault on the Gaza Strip, ignoring a UN Security Council statement on Saturday unanimously calling for both sides to agree to a ceasefire.