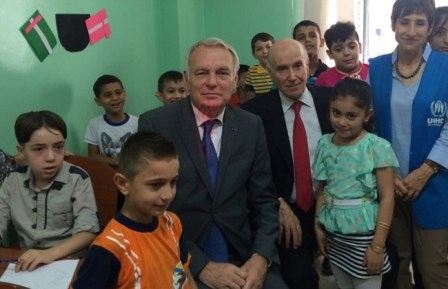 French Foreign Minister Jean-Marc Ayrault rolled through the streets of Beirut southern suburb of Haret Hreik for his visit to Amel Association. Upon arrival at Amel’s center, Ayrault and French Ambassador Emmanuel Bonne were greeted by Amel founder Kamel Mohanna, who showed the delegation around the project.

The French foreign minister’s two-day visit primarily focused on meeting with leading political figures to discuss the presidential crisis and the Syrian refugee situation in Lebanon, a country he recognized has been hugely affected by this exodus. “The destruction of Syria has led to the flight of millions of refugees, but the majority of them are not in Europe but near Syria’s borders – in Lebanon, Turkey, and Jordan,” he said during his tour of Amel.

As a non-sectarian, non-profit NGO supporting Lebanese populations in need, Amel’s community center teaches languages and trades to both nationals and refugees. The organization is a candidate for this year’s Nobel Peace Prize alongside the likes of Angela Merkel and the Greek island of Lesbos, all three for their role in the ongoing refugee crisis.

As Ayrault strolled through classrooms full of men, women, and children learning computer science, sewing, or English, he enquired where they were from, and whether they were satisfied by the education and training they received at Amel. Eager to show their progress in the minister’s language, some of the 140 children taught at Amel counted to ten in French under their teacher’s watchful eye.

Two thousand people in total benefit from the center’s facilities and teachers.

“There is an incredible dedication here. It was important for me to come here, meet all those who, professionally or voluntarily, bring support, and the refugees who are looking for a little hope. There is a lot of humanity here,” Ayrault told the assembled press afterward.

Yet as he was shown the community center, Ayrault was gently reminded by Mohanna that more help was needed for Lebanon to face the challenge of the refugee influx.

After thanking the minister for his visit, and France for its help, he pointed out that, “the situation is catastrophic and explosive. Lebanon must be helped for helping Syria. The European fortress must open its borders and apply the Geneva Convention. We thank France for what it gives us, but I find the donations insufficient,” he added.

Ayrault spoke of France’s promise to, “rapidly send 200 million euros [$222 million]” to Lebanon for NGOs supporting refugees. This method of direct help to organizations seeks to avoid intermediaries and ensure that money is used effectively. This approach is favored by NGOs like Amel, which feel like too much of the money sent from abroad goes to logistics or is lost on the way. “Money needs to go to beneficiaries, not logistics,” Mohanna then concluded.

Ayrault also reiterated French President François Hollande’s decision to host 3,000 Syrian refugees from Lebanon in France within the next two years, a number deemed too low by Mohanna. Representatives of the French Office for the Protection of Refugees and Stateless Persons (OFPRA), recently visited Lebanon to set up the logistics of the refugees’ transfer to France.